Are Press Releases Still Relevant in 2019? Or Are They Dead? Here’s Why They Still Matter.

When you ask yourself “are press releases still relevant” and if they matter in 2019, let me ask you instead—does your narration matter?

In the days of having a constant “appetite” for information (which can be contained in 140 characters), it would seem that journalists are no longer able to go through the press releases they get from PR teams.

And especially since instead of substantial information, they very often receive messages such as this one:

Before you think the press release is dead, the truth is that because of the ever-growing information bubble and news jumping at you like “pop-up” ads, there is a need for brands to create their own narrative like never before. But can press releases remedy this situation? As it turns out, it is an exceptionally easy form of popularizing content which does not imply high costs.

Why is it worth doing?

First of all, you provide your potential clients with the opportunity to get to know your company. Another advantage of publishing press releases online is the fact that they can still be accessed years later. The presence of such content in various branch services will make your company more trustworthy.

“There is always something going on at their place”

When I worked as a journalist in a branch editorial office, I used to contact PR teams practically every day. Especially since they were the target audience for my content (something like a Polish equivalent of PR Week or PR Daily). And I can honestly tell you that I have a much better recollection of working with PR agencies which released press information compared to those from which I did not receive any messages. I very often thought to myself, “If they are sending out so many messages, their business must be thriving.” In short: you show the world that you keep growing.

Press releases also present knowledge on subjects in which a given agency specializes. If a journalist is looking for an expert in a given field, there is a chance he or she will contact you if they associate you with a particular subject. Trust me, I’ve been there.

You don’t want to hear: “It is oriented at the product, the expectations of the company’s owner, and not at something objectively interesting, which is why it does not generate any added value.”

I know from my own experience that original comments to current topics published in press releases may constitute a source of inspiration for journalists.

Such was the case of the crisis in Malaysia Airlines, which had to deal with the mysterious disappearance of their Boeing 777 aircraft. Various editorial offices were very much interested in the subject, and top experts were spending their time in TV studios, instead of answering phone calls (TV is always a priority). I was also looking for someone to comment on the subject from a PR pro’s perspective, which is why a press release entitled “What can we learn about crisis communication from Malaysia Airlines” sent by an agency expert served me as a media review.

If you’re constructing your press release and start like this, “ABC is to introduce an update of the online store from 1.0 version to 1.0.2 beta…,” you are ruining your chances for getting published in any media channels other than your own. Look at your text from the perspective of an online editor and think why they should put it up on their website. Is it worth it? And now introduce changes as regards the elements which made you hesitate when you were trying to “make a decision” on the publication. 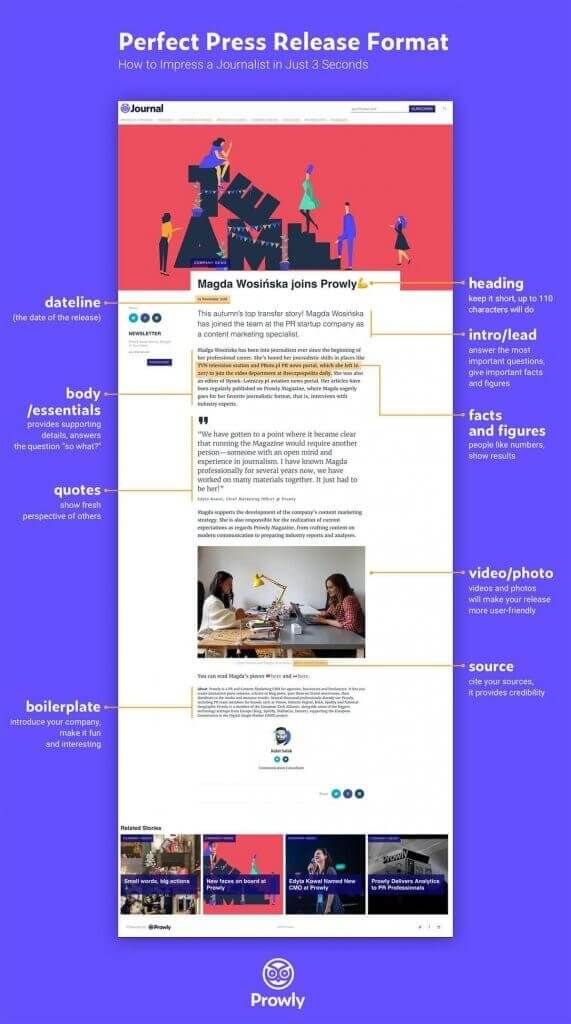 Now imagine your company was involved in a successful social action. What do you do? You can write an ordinary note and pass it to the world. Or, you can get into the role of a journalist who is covering the event. This is what IKEA did once, when the company published coverage from their employees’ trip to Jordan on their news site. The employees were assigned with a task to learn how funds collected from social campaigns ran by the company were used there. What are the possible benefits of posting a text like this? The media will know that you’re organizing cool actions, so you can show them a wider context; let your employees speak. The journalists will know that they can use your narrative in three contexts: employer branding, working in the company from the employees’ perspective, covering an interesting social campaign. The advantage is that you are the author of this narrative.

Before anyone clicks on a text on your website, or even earlier—at the editorial office that is supposed to publish it, what they will see is the title. If it’s not interesting enough to draw their attention or clear enough to make reading it a priority, you will lose your chance already at the very first stage. A good old rule of journalism says, “Start your writing with the title. If you don’t have the title, you, in fact, have no idea what you are going to write about.”

When writing a press release keep in mind that times are changing and something that could ‘wow’ a journalist a few years back, won’t impress him today. Think about what will be a trend next year and apply it now. Remember – you snooze, you lose.

Set the priorities right so your press release is relevant

Here’s another rule followed by many journalists that you may find useful. The reversed pyramid—state the most important information first. Include the entire message in the very first sentences, so that the person reading the text immediately knows what it is about. Nobody will care to seek substance among numerous sections. Also, adjust your language. Leave sophisticated embellishments for another time, and instead use simple, concise sentences when writing your releases. [We picked for you 6 really bad press release examples that you should be ashamed of]

A valuable press release is the only one that counts. Journalists will be complaining about anything less. One of them, when asked about the biggest sins of PR releases, once told me: “It is oriented at the product, the expectations of the company’s owner, and not at something objectively interesting, which is why it does not generate any added value.”

You better avoid that!