Tech.eu Report: Startup Europe Still Far Behind the U.S. With Poland Bringing up the Rear

Tech.eu has recently summarized the first quarter of 2016 as it relates to financing obtained by European, Israeli and Turkish tech startups. It’s an important quarter which warrants a closer look. What conclusions can we draw for both the entire Europe and our domestic market?

Below are the main takeaways from the report, with a breakdown of what you can expect to find in it: 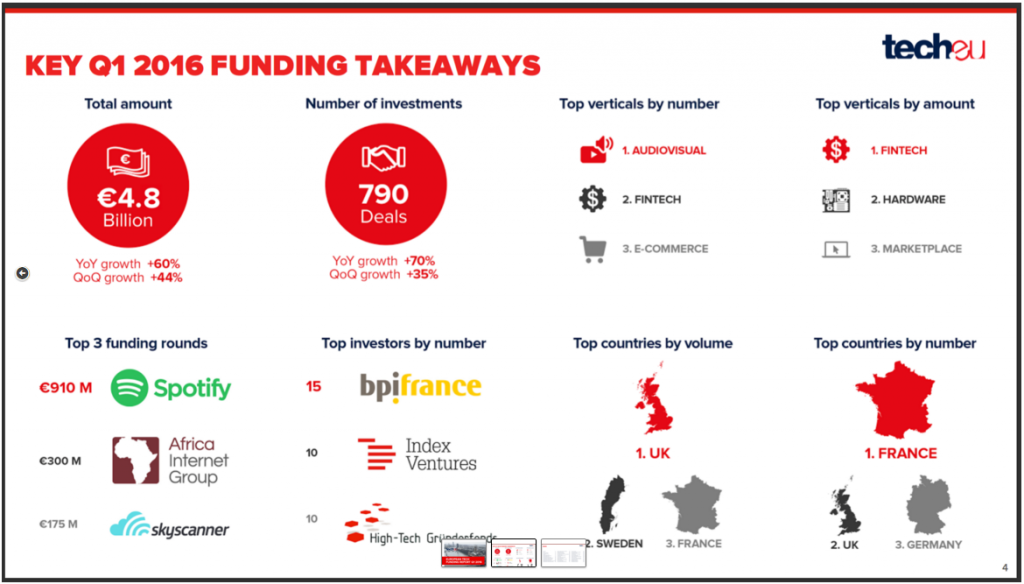 The first quarter of 2016 witnessed a record number of deals (790) with a total worth of €4.8 billion. This has been the most investment for Europe, Israel, and Turkey since Tech.eu began following startup financing.

The UK remained the leader in Europe, having raised more than €1 billion over 122 rounds. When it comes to the number of investments, however, France took the lead with 135. FinTech continues to garner a lot of attention with the representatives of the category bringing in €527 million worth of funding across 100 rounds.

How do the industry experts and startup reps comment on the report?

The report confirms what we already know about the young Polish market. When scouting the European startup ecosystem for our corporate clients, we see that the majority of CEE startups are still only local or regional heroes. But they do have a cost advantage, strong technology & UX teams.

First players like Zencard, Growbots or Kontakt.io are developing unique products and starting to scale them internationally, while attracting top investors. One day, the founders and early backers will for sure start reinvesting the capital in the region. We can be optimistic about the future.

After the market uncertainty in late 2015, it’s been great to see promising growth in the FinTech sector. At Money20/20 Europe in Copenhagen, we experienced the market sentiment and witnessed a number of deals being conducted on site. The future certainly looks bright in the European region for startups.

Grzegorz Kubera – the author of an economic bestseller “Create a Unicorn. From an idea to a startup worth millions,” a prolific entrepreneur – the founder of a startup studio GLIVE.pl and a tech consulting firm Serigala Tech among others:

There are lots of opportunities for financing and growth for startups that can combine typical human skills with typical computer abilities, for example, artificial intelligence or advanced mechanisms of data analysis and processing. Intuition and creativity come in handy at the start when we want to create something, but later the focus should be on automating the company processes. This approach has been employed by the entrepreneurs behind the unicorns of the market – companies valued at over $ 1 billion. There are about a dozen or so unicorns in Europe. They include Spotify ($ 8.5 billion), Global Fashion Group ($ 3.4 billion), Delivery Hero ($3.1 billion) or HelloFresh ($ 2.9 billion), but we are still way behind the U.S. where the number of unicorns exceeds 100. We should add that Poland still does not have a single startup worth this much/with this price tag.

Entrepreneurs seeking seed capital and then later rounds of VC funding should focus on building platforms, especially those that connect buyers and sellers (Uber, Airbnb). These kinds of platforms enable the broad possibilities of commerce and communication and have relatively low barriers to entry – makers of platforms don’t normally create physical goods and don’t carry stock. Users, on the other hand, can test the real value of such a platform (for example savings) and consequently become regular customers. Then the startups can concentrate more on monetizing regular and loyal customers, than spending resources on acquiring new ones. Platforms are also easier to scale, especially those that support online activities.

The entrepreneurs who create and develop platforms can later count on passive income often referred to as “earn while you sleep.” What’s most important, they can also focus on growing the business rather than working in it, which then really makes them entrepreneurs, rather than just “self-employed.”

Poland lacks platforms and entrepreneurs who would like to create and develop them, but more importantly it lack the people who know how to do it. Only when our domestic market produces more startups of this kind, will the foreign investors begin to notice us and be willing to invest in particular enterprises.

The key piece of data stemming out of the report is the amount of €4.8 billion – that’s the total raised by European startups in Q1 2016. That is a record quarter. In comparison to Q1 2015, that’s a jump of about 60 percent. However, almost one-fourth of this amount belongs to just two rounds of financing – that of a Swedish music service Spotify and Africa Internet Group, which totaled over €1.2 billion. If we take away these two transactions, then we basically have the average from last year (€3.7 billion), and therefore, I’d be cautious with announcing a boom on European startups.

First of all, we still lack the competitive potential of the American market, which is much more liberal about the forming and functioning of startups. This is the area of work for the European Tech Alliance, which includes Prowly, but there is still a long road ahead, and this doesn’t only refer to creating more startup incubators or facilitating contacts with potential investors through initiatives like D-RAFT.

Early support is crucial, and it starts with unifying the EU laws, limiting the legal requirements, introducing tax breaks (for example for the initial period of operation) and forming special zones or office spaces where these kinds of companies could start their activities.

Secondly, the old continent is still far less attractive for the potential employees. Both the EU and its individual members should actively help in the transfer of innovation and new technologies. An excellent example of this happened few weeks ago when Spotify, in an open letter to the government of Sweden, pointed out the problems with employee accommodations, high taxation of employee stock and an insufficient supply of domestic programmers. It’s an important moment when one startup can have a real influence on the policies and the economy of a European country because if the government does not agree to the changes, Spotify together with its thousands of employees may leave Sweden or even Europe altogether.

There is one Polish thread in the Tech.eu report. The Polish market in the last quarter saw only seven rounds of financing totaling €23 million. Among them was the financing obtained by Prowly of about a million euro. In comparison, the three countries with the most rounds were: France (135 rounds – €731 million), the UK (122 – €1.1 billion) and Germany (115 – €390 million). Despite having talented programmers and an increasingly better functioning startup community, from the investment standpoint, we are still less attractive than Western Europe or Israel. This, in turn, causes some startups to move to more attractive environments, thus creating a vicious circle.