Per Schlingmann: Traditional knowledge Is No Longer Enough. 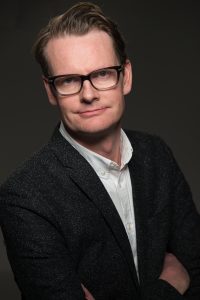 Per Schlingmann is a thought leader and one of the leading futuristic speakers in Sweden, he lectures in the areas of Communications, Strategy and Change Managment. Through the combination of his experience of leading radical change and being in the front of developing new ways of communicating Per is uniquely suited to act as a guide to understand how to navigate in the future. He is focusing on the direction people, companies and the society now are heading.

He has a unique background from both Politics and Business communications. Per has founded and been the President of a Communication ­Agency­, Secretary General of the Moderate Party and State Secretary in the Prime Ministers Office. He is well known for his work with the successful renewal of the Moderate Party and is perceived as the main spin doctor in Sweden. He has been pointed out as one of the most influential communicators and has been a very appreciated columnist in Swedish newspapers.

We met up with him in Warsaw – where he was holding a lecture about urbanisation and digitalization during Wolves Summit, the conference focused on innovations in business and technology, that took place on October 25-26th. And we had a pleasure to ask him few questions:

Edyta: >The most rapid urbanization in Europe is happening right here in Sweden – a trend that author, speaker, former politician and PR consultant Per Schlingmann welcomes but that others call a negative new “urban norm”< – this is an extract from one of the reviews (of your “Urban Express” book) I read some time ago. Why should we be open to it?

Per: There are a lot of reasons. We humans tend to like to live close to one another. That is how we exchange knowledge and learn from each other.

Cities are also a good foundation for innovation because you will meet a lot of people who are different from you – and diversity is a driver of innovation and growth. As a human being and as a company, we must constantly review our own knowledge and understanding of things. New meetings and ideas arise in the cities. Cities, therefore, are great for learning. Being close and working together is today’s best education!

Edyta: The book is a result of your meeting with Kjell A Nordström, an advisor to global enterprises. As far as I know, the first one was in Barcelona. It was not long before you began working on a job together. After this, and “quite out of the blue,” as you put it in some other interview, you decided to write a book about your shared thoughts and interpret the present. Quite a complex task. Why? Why now?

Per: Why not? We immediately liked and respected each other. While Kjell – as a former Ph.D. in BA and co-author of bestselling Funky Business – was focused on globalization and enterprises, I had been focusing on society, politics, and communication. We identified a need to try to interpret our present and create a framework, a guidebook for the unpredictable times we live in. We saw it as an experiment to merge our brains and see what would come out of it! It was also a test of our own thinking. How stuck we were to our worldviews, and if we were able to listen to each other. And it was fantastic!

Edyta: You compared the work process that you made with building Lego bricks. Was it so easy or so complex?

Per: This book was relatively easy because both of us had a lot of thoughts which we wrote down in so-called Lego bricks or pieces of a puzzle that we put together. We also had a clear picture and a similar approach to the book. The challenge is always to make it understandable to the reader. There was overall a lot of creative flow in the process, mainly because we trusted each other and had a lot of fun!

The next book, which we’ve just started, will be a lot more challenging because we have to analyze the world of today together.

Per: That’s right! It´s the opposite of the “end of history” theory – that everything is determined. We live in an era where everything becomes more and more foggy. It is more difficult than ever to predict what will happen in the future.

The world as we know it is changing every day, all the time.

Change is not a static condition that occurs in a given time – everything changes all the time. It can seem stressful for some people, but it is the future that we have to relate to. The only thing that is constant is change – and maybe human behavior to some extent.

Edyta: I guess the most dramatic change for humans is that traditional knowledge is no longer enough. No matter how great the universities of today may be, they only teach basic knowledge, and it’s not sufficient. In order to succeed today, something more is required. You call it “wild knowledge.” I am wondering: are tacit knowledge and wild knowledge really one and the same thing? Are they synonyms? Or you’ve just created a new term?

Per: They are very close. We created new terms because we make a wider definition. For us, attitudes are also a part of this.

At all times, we’ve exchanged knowledge, and by living close together, we have studied our ancestors, listened to each other’s stories of life and thus gained the knowledge and protection that we needed to get by in life.

Today, the knowledge of the world is so much bigger and wider than we have ever imagined. Family constellations look different. We live increasingly more often in single households.

The need for other people and exchange of knowledge is greater than ever.

You need the right instinct and attitude to get close to the right people for the kind of knowledge you need. It takes an active approach to reach that knowledge. If you fall outside your knowledge clusters, it will be more difficult to solely base your success on traditional knowledge.

At the same time, the development increases the value of everything that cannot be copied.

Edyta: You say that we should always be able to think outside ourselves and try to do new things – this is critical to navigating in this world. How does it impact public relations and marketing nowadays? Everybody in this area is talking about digitalization and tools; you are talking about new, non-digital competences – wild knowledge that can’t be taught at universities.

Per: It is vital for public relations because the feeling about how to form a story and to define the content that people want to talk about is vital. And it is about feelings and understanding your target group. Digitization is important in terms of channels, big data, and measurement. But I would be a little bit restrictive here – you have to find people with the wild knowledge on how to build stories.

It is difficult to define intuition and experience. They have always been the key skills of communicators. Today, it’s important to be able to navigate in all the new impressions and pan for gems. It’s easy to drown in today’s abundance of information. One must have a clear compass and a strong personal network.

Edyta: Let’s stay for a while with this new communication landscape. You said some time ago: “If you want to reach out, you have to make sure that others want to talk about it. You have to create a subject for discussion. The interesting element here are the strong stories.” Most brands have a problem with it – they want to tell their story, but they don’t know how to start. Any advice?

Per: I think it is about connecting your company or your offering with the society or the market in which you are working. It is about defining how you want to establish the story about yourself and create content which supports this. I usually force myself (or the company I am advising) to limit the story to maximum one page. The more you reduce it, the better chance to get everybody to understand it. I would start there, with what we have and what we are and connect ourselves to the world outside.

Edyta: On the other hand in your latest book, “Så vinner du kommunikationskriget – med berättelsen som vapen” (Winning the communication battle with storytelling as your weapon of war), you claim that man’s worst enemy is his own worldview.

Per: That is in terms of how you have to work with the constant renewal of your business and find new creative ideas for communication. What I mean is that you always have to question your worldview in a world with a high pace of change.

Edyta: I asked some experts about the trends that will shape comms in 2017. One of them said that we should consider your organization’s role in the greater world, rather than trying to build a “brand” community. What is your opinion?

Per: I don´t think they are in contrast to each other. I totally agree on the need for companies to connect with the society and to be able to answer why they exist beyond creating profits and value. There is an increasing demand for this from customers and the talents you want to find and keep.

Edyta: When I think about your book, I think it is really a guidebook with 15 urban rules, steps in the Matrix of our time. Which one is the most important?

Per: I think the most important is always to question your worldview. Today, we have to learn and delearn all the time!

Edyta: Sounds fair. Do you think this list will evolve in the future or rather we will minimize it in some way?

Per: With the increasing complexity, I think the list will increase. We will add more rules about understanding the human behavior. That is key for all business.

Edyta: Last question: Do you have a role model?

Per: Yes, I have! Astrid Lindgren, the Swedish author who wrote stories like Pippi Longstocking. I am fascinated by her imagination. She was active in a time with no Internet and very few media, and she was able to write these stories that still live around the world. Imagination is key.