Amusement, Interest, Surprise, Happiness, Delight, Pleasure, Joy, Hope, Affection and Excitement. We all know them. We all feel them. Every day. But did you know that these are the top ten viral emotions which will help you connect with consumers? Some experts prefer to boil this list down to: Fear, Hope and Love. But still, we have quite a great spectrum here, don’t we? Well, we already wrote about it – tapping into the audience’s emotions should be an important part of every PR strategy. Why? Feelings can be a crucial factor when it comes to the question whether your campaign has a chance to go viral or not (scientifically proven). I am sure you have read at least dozens of articles about the top trends to follow this year (here you can check out ours and if you have, you already know that 2016 is the year of emotions. Is it going to stay on the top a little bit longer? Sure. Just try to remember how long we’ve been prophesying that content is King.

Ok, so we’ve established: marketing isn’t rocket science, it is neuroscience. That’s why you should leverage emotions in your content.

Basically, you have about 2 seconds to get people’s attention – that’s your first couple of words. I hope, for example, that you were drawn in by my first sentence and lured down the page.
With ads and social campaigns, it’s quite simple. And experts representing these branches use emotions very often. No wonder. In an analysis of the IPA dataBANK which contains 1,400 case studies of successful advertising campaigns, campaigns with purely emotional content performed about twice as well (31% vs. 16%) as those with only rational content (and did a little better than those that mixed emotional and rational content).

A great example is Dove’s highly successful “Real Beauty Sketches” campaign which explores the gap between how others perceive us and how we perceive ourselves. Each woman is the subject of two portraits drawn by FBI-trained forensic artist Gil Zamora: one based on her own description and the other using a stranger’s observations. The results? Surprising.

The success of this highly emotional clip speaks for itself: to date, the video has more than 67 million views on YouTube.

Now an example with negative emotions. Just a warning: brace yourself if you decide to watch it (produced by Zoetis, a Hungarian company that sells medicines for livestock and pets):

I could mention here a great campaign connected with each kind of feeling. Shock? Watch a stunt to highlight global child rights abuse (UNICEF). Humor? Check “Do it for Mom!” by Spies. Hate? #saynotorasism (FIFA) Affection and Interest? Security Moms (Mães Seguranças). Take a pick.

But what about your press releases and pitches? Well, the same.

Research – find out what really matters to your audience. What keeps them up at night? What do they desire?

Before doing anything, ask yourself if you really know who your target audience is. Do your homework before you write and send a press release or prepare any other kind of content. “In this case, know something about the target you are pitching, presumably a publication or a media outlet. For example, do you know if this media outlet writes stories about PR agencies? More specifically, does this media outlet write about what’s covered in the press release? Does it write about personnel moves? Agency of Record announcements? Agency mergers and acquisitions? When I receive a press release from someone who has no idea what is covered in the publication I work for, it often ends up in the trash bin.” – comments Seth Arenstein from PR News in our article on how to write an effective press release.

At Prowly, we have a few people who send press releases or other content to our audience. And we need to keep our team workflow clear, simple, quick and effective. That’s why we always take excellent care of our journalist base – we segment them into different groups based on their interests, the branch they represent, their engagement – opened and clicked emails, etc. We even add some notes to selected contacts so others in our team could know for example that Mr. XY doesn’t like when we write to him two times a week or that Miss XY asked for some extra photos and data after our last The SaaS Startup Founder’s Guide. Just imagine the ways you can use such a feature ;) In fact you should know about your audience a lot more: what type of humor do they appreciate? How sophisticated or simple is their language? What frustrates them, angers them, pleases them, what problems do they speak about and what sites, social media channels they hang out in? You are not going to get your ‘foot in the door’ unless your first interactions are concise and to the point – underlines Mike Butcher. Thanks to a good analysis, your company can communicate in a way that speaks directly to them, connecting on an emotional level. By doing this, you create brand loyalty.

I bet that most of you think that smuggling some emotions into your press release or pitches is difficult and useless. You all know, that it should answer some questions, have a good construction, and a catchy topic and title. This is basic level – if you still have any questions about what a perfect press release format should look like, you should read this first. And yes, you have to be sure that your target group will love this kind of communication. Some people won’t, for example tech journalists. “I sincerely don’t recommend building any kind of emotional dimension into your pitches. There was a string here a few months ago from PR asking if journalists liked video content and the numerous responses that came back were almost universally negative.” – answered Sarah Safferty on TechJPR group on FB when we asked about any interesting and emotional examples of personalized video PR pitches. But is it a general rule? No. It depends on your relations and experience, on your brand and how it wants to make its audience feel.

So, ready to take your pitch to the next level?

Here’s how Chevrolet, trying to appeal to a younger generation of buyers, introduced its press release announcing the 2016 Chevrolet Cruze: no words — only pictures. A press release composed entirely of emojis. The carmaker even inserted its own “bow tie” logo emoji for this release. “We wanted to have fun and be irreverent with our audience,” Craig Daitch, Chevy’s senior manager for social media, said to Business Insider.

After publishing it, Chevy was encouraging intrepid readers to attempt to decode the news ahead of the real announcement which was released a few days later.

Are you emoji-literate enough to decipher it? 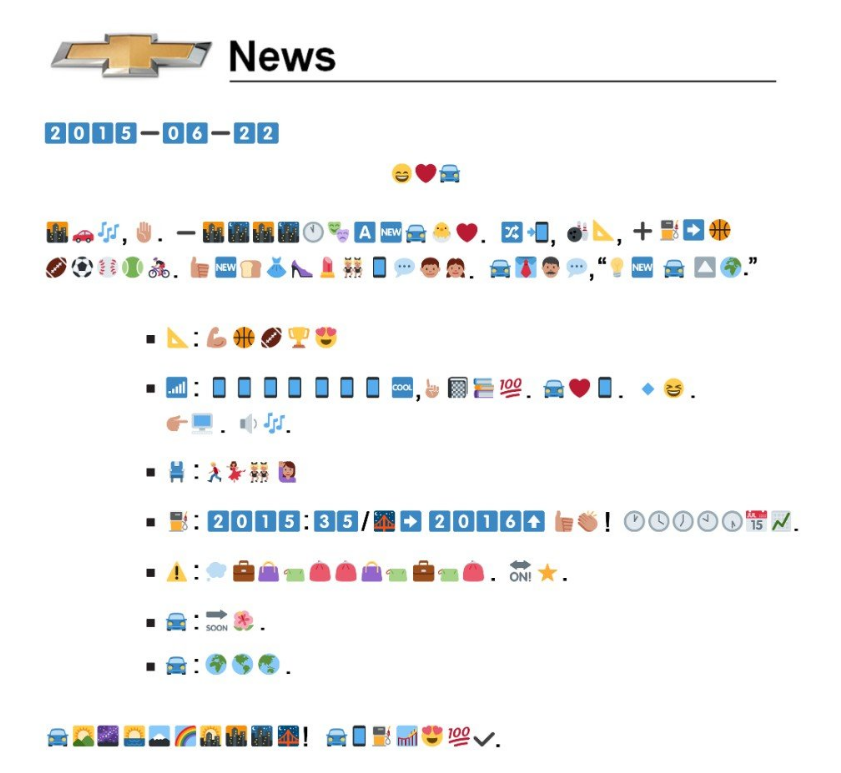 Well you should, because now you can even buy a version of the Bible written with emojis. In case you had some problems, grab a translations script here.

Emojis can boost your email marketing too. Here, you will find a ready-to-go list and use it in your emails or on the website. Need a list of benefits too? They increase open rates, save space, convey emotion, stand out in a crowded inbox. Just remember – they aren’t for everyone. Test it first to make sure your audience responds well.

Only by 2015, the average person was exposed to 15.5 hours of content every day. If we can cut through the noise with some emojis, why not to try the same with GIFs?

Take a look at the press release by ChildFund International. The nonprofit issued a GIF-only press release to support its annual Real Gifts catalog. You can check it out here and find a translation here. The goal? To find “a quirky way to draw attention to how people can give more meaningful gifts than traditional flowers and candy this Mother’s Day.” Did they make it? How do you feel about it? We love it so much, that some time ago, when we launched this blog, we published an article “A Day in the life of a PR pro in GIF form” and it had a great number of views and shares. Today, I can admit that it took a longer time to find proper GIFs than it took to embed them into text . Now, you can try it in our Story Creator – it works much easier: you just write down a keyword, pick the right GIF from the Giphy base and drag & drop it wherever you want in your article. Same with photos and social media posts or pitches. The goal? To allow you to create the most authentic stories in the fastest way.

Remember Coca Cola’s “Share a Coke” campaign? Although it used a number of integrated marketing methods including outdoor marketing and retail, social played a major role in the success of the campaign. And it worked well, giving Coca-Cola a 2.5% increase in sales.

Anyway, the brand used 250 popular US names as well as modern slang such as ‘bestie’ to personalize its products. The names were printed on the packaging, with consumers encouraged to shout them out when they found their name on a bottle. #Shareacoke helped people share this thrill with others. If Coca-Cola had a Brand Journal, it could show/promote each post tagged with #Shareacoke on its feed or simply add chosen posts into a press release promoting the idea.

Pitch them, hook them

Adding emotional context to your marketing will not just make your campaigns more touchy-feely, but make them more engaging and effective. Just think about startup players and their product pitches. All of their sweat, blood and tears have come down to this: how effectively can they paint a picture of a better world in your prospect’s mind’s eye? They often struggle with telling about the product in an appealing, quick and easy to understand way. I know something about it. Talked to numerous startup vendors during D-RAFT events, when they were looking for investors to cooperate. How do their video pitches look like? Unfortunately, boring. And they don’t have to.

Check this incredibly well done and creative video. I listed it here for a reason. Get it? ;)

When building emotive content, remember the following:
– the four key emotions that best target consumers are happiness, sadness, fear and anger
– consider your audience and how you want your brand to make them feel
– create content that will target and engage your market.

“People are built to better engage with content that tells a tale. By using emotion within your story, and choosing a narrative that you believe in, you are more likely to encourage consumers to act.” – claims Ben Martin, Creative Director at Peppermint Soda, on digitalmarketingmagazine.co.uk.