Best PR and Marketing Campaigns & Stunts of the November 2015

Last month we presented best PR campaigns of the autumn. Here are the top five PR and marketing campaigns and stunts throughout November 2015. Scroll down to the good stuff :)

Translation service ELaN Languages wanted to show how good its tool is – so, a Japanese recipe was translated pitting it up against Google Translate. What do they want to know? „Which one tastes better? A recipe translated by Google Translate or by ElaN Languages?” – they ask in a nice and creative video. The idea is simple: a chef cooks two translated recipes and the dishes are served to people who tasted them blindfolded. The outcome? The best dish is the ELAN translated one.

PR tip for the future: if your product or service is better than the one most commonly thought of as a solution to the problem you both solve, think creatively about how you can demonstrate that.

In a stunt to highlight global child rights abuse, UNICEF hired actors to play travel agents. The actors visibly shocks parents offering tchem unthinkable travel experiences for their children which are still a daily reality for millions of children and teenagers in Brazil and throughout the world.

In a new social media campaign video created by Havas London, Durex wants to get people talking about safe sex. Thats why it is calling for the creation of a condom emoji. Launched in the run-up to World AIDS Day on 1st December, the campaign video is live on YouTube, Facebook and Twitter.

Suggestive sex emoji such as the peach and eggplant emoji already exist and are usually used to represent intercourse. However, none of them express safe sex in a text message. Durex wants to change that by using the hashtag #CondomEmoji on social media and spread the word.

“Emojis of this sort will enable young people to overcome embarrassment around the discussion of safe sex, encourage conversation and raise awareness of the importance of using condoms in protecting against sexually transmitted infections (STIs), including HIV and AIDS,” said Karen Chisholm, marketing director for Durex USA, in a press statement.

Mark Whelan, Global Creative Officer at Havas London commented, “With the Oxford dictionary having recently named an emoji as word of the year, it’s clear that the way we communicate has changed. For a brand like Durex that plays an important role in helping people have safe-sex, it’s important to understand this and help young people in particular have this conversation in a way that’s natural to them.”

Volker Sydow, Global Director Durex added: “Durex believes in happier, healthier sex lives and World AIDS Day is a hugely significant reminder about the importance of safe sex. Looking at how influential messaging is in the development of relationships today, an official safe sex emoji is a simple and empowering step towards better protection and sexual wellbeing.”

What is interesting, Durex also gathered some data on young people’s sex conversations that revealed 84% of 18 to 25 year olds find it easier to express themselves using emoji when it comes to talking about sex.

“How many hours have you spent hungover on the sofa wishing someone would just bring you pizza? Well, Domino’s has finally answered your prayers” – we read in Metro. Now all you have to do is press a button. Working with Flic, Domino’s have created a physical Bluetooth button that will link you to the Domino’s app, where you need to save your usual pizza order, as well as your delivery and payment information. After it, every time you push the button, it will link to your phone via Bluetooth and automatically place an order. 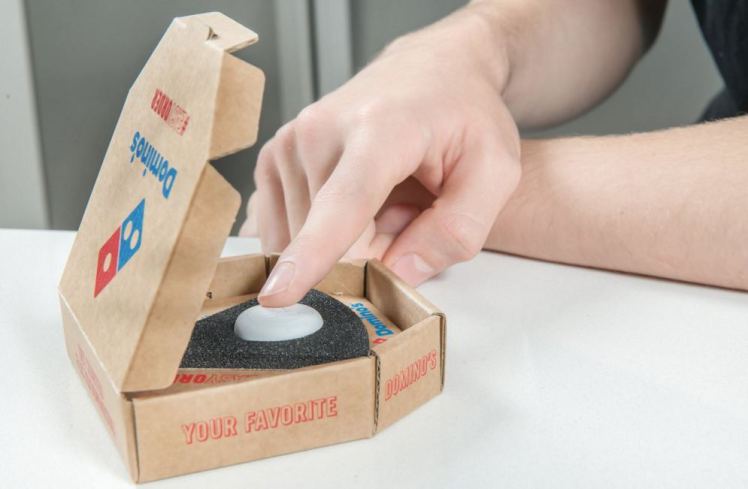 Just notice, that Domino’s is offering out the limited number of physical buttons, that come in a mini pizza box, to their UK customers over their social media channels. For those not lucky enough to get one, their is a virtual button on the app that is just as easy.

Danish travel agency Spies Travel’s (Spies Rejser in Danish) released a brilliantly put-together campaign video, following-up to 2014’s „Do It For Denmark” , asking Danish grandparents to prepay for active holidays for their children in a bid to address the country’s low birth rate (because people have more sex on active holidays, obviously). It is viewed by more than 7m people so far. The ad itself hits all the right notes, playing the emotional card initially before jumping straight to the humour. Props to Spies Travel for this.